He has come so close but is still so far from his ultimate goal.

Having won the 2019 Australian 100km race in Wangaratta, Dawson dared to dream of lining up for Australia at the world titles in The Netherlands.

The Karalee runner was on the verge of achieving that ambition last year before COVID struck.

His hopes of taking his supportive wife Michelle and young family overseas were shattered.

As someone approaching 40 who enjoys training with rapidly emerging middle distance runner Jude Thomas, Dawson summed up his predicament perfectly.

“As an older athlete, and one who is not as prodigiously talented as Jude, my options are pretty thin on the table,” he said.

“I was planning on wearing the green and gold maybe once in my life and I was pretty gutted last year to have that taken away.”

However, true to his relentless determination, Dawson is not giving up his dream just yet.

He recently won the latest Australian 100km race in Coburg, successfully defending his previous title before the COVID menace struck.

“That’s why this race was a bit more of a redemption,” the Rosewood State High School teacher said. Ipswich athlete Clay Dawson paces himself on the Coburg track on his way to winning another 100km national title.

His 2021 winning time of seven hours and seven minutes was outside the sub seven hour world qualifier he had earlier achieved in breaking the Wangaratta road course record.

Having to run more than 230 laps around the Cobram track, he was pleased to have secured another B qualifier standard.

His hope last year was to compete at the world championships.

“At that point, the goal all things going well, was to run in Amsterdam, take the family over there and then think about our second baby,” he said.

“But COVID kind of shuffled those plans around.”

Having enjoyed considerable success in past marathons, Dawson knew his latest 100km race would be challenging.

Running for seven hours keeping hydrated and grabbing whatever food was available on the track would test anyone’s mental stamina ― even in perfect conditions.

But Dawson made it sound almost comfortable.

“My lead-in was absolutely stellar,” he said, averaging 170/180 kilometres a week from the start of the year to prepare for the race.

“The NANCI (running) crew kept me well and truly in check and made sure everything was 100 per cent when I got down there.

“My teammates were great in helping me get those k’s (kilometres) up and my wife putting up with the fact I wasn’t around.

“That was definitely the biggest training block I’ve had in terms of volume.” “He’s always one of those go-to, principal ones I spoke to,” Dawson said.  “To get a vibe whether it was possible and he was one of the biggest encouragers to do it and a big inspiration.

“He gave me lots of tips of hydration and all sorts of stuff.

“He’s a very knowledgeable guy and equally crazy as well.”

He competed with about 60 people on the track at the same time, starting his event at 2pm and continuing into the evening.

“The other race competitors were brilliant,” he said.  “We chat to each other as we went around.

“I was trying to find some food before the race and I couldn’t find any.  It was quite an isolated oval so I didn’t really get to eat as much as I would have.

“At the back end of the race, I struggled a bit physically.  But even so, with the training and condition, I held on phenomenally well.” 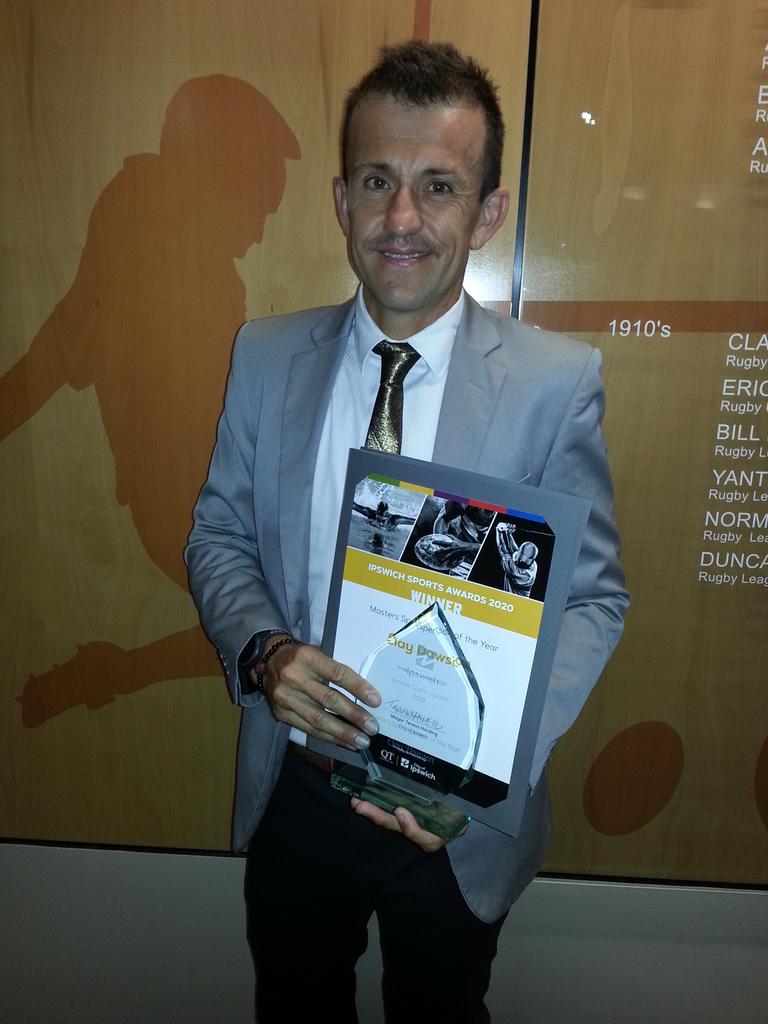 2020 Masters Sportsperson of the Year Clay Dawson fittingly savours his moment in Ipswich’s Sporting Hall of Fame at the North Ipswich Corporate Centre.

Dawson was fittingly named Masters Sportsperson of the Year at the 2020 City of Ipswich Sports awards.

Having achieved so much competing and promoting the sport, he deserved the accolade.

He now clings on to his dream of representing Australia at the next world 100km championships, should they be allowed to go ahead.

Sadly, he’s not holding his breath about other Oceania championships being talked about for next year.

In the meantime, it’s back to focusing on marathons as he completes five weeks of leave.

He hopes to contest the Brisbane Marathon on June 6, an event he has placed in before.

He’s plotting more success at the 2021 Sunshine Coast Marathon in August before possibly heading to Cairns for that marathon in September.

“I can’t wait to run another marathon,” Dawson said.

That sums Dawson’s never-ending desire to compete, even if time to represent his country is running out.