Queensland Combined Events silver medal winner Toby Stolberg is excelling in heptathlon, along with her other sports.

WHEN you are coached by a supportive mum who has reached national level, pursuing multiple sports can come naturally.

Her mum is well known around the region as “Marty”, having been former heptathlete Theresa Martin before marrying husband Ryan.

Marty continues to provide terrific encouragement to Toby who is following a similar path.

The Ipswich and District Athletic Club competitor impressed in the seven-event under-15 program with a total of 3668 points.

In a highly competitive field, Toby secured personal bests in the 200m, shot put and 800m.

She equalled her previous best winning the high jump. 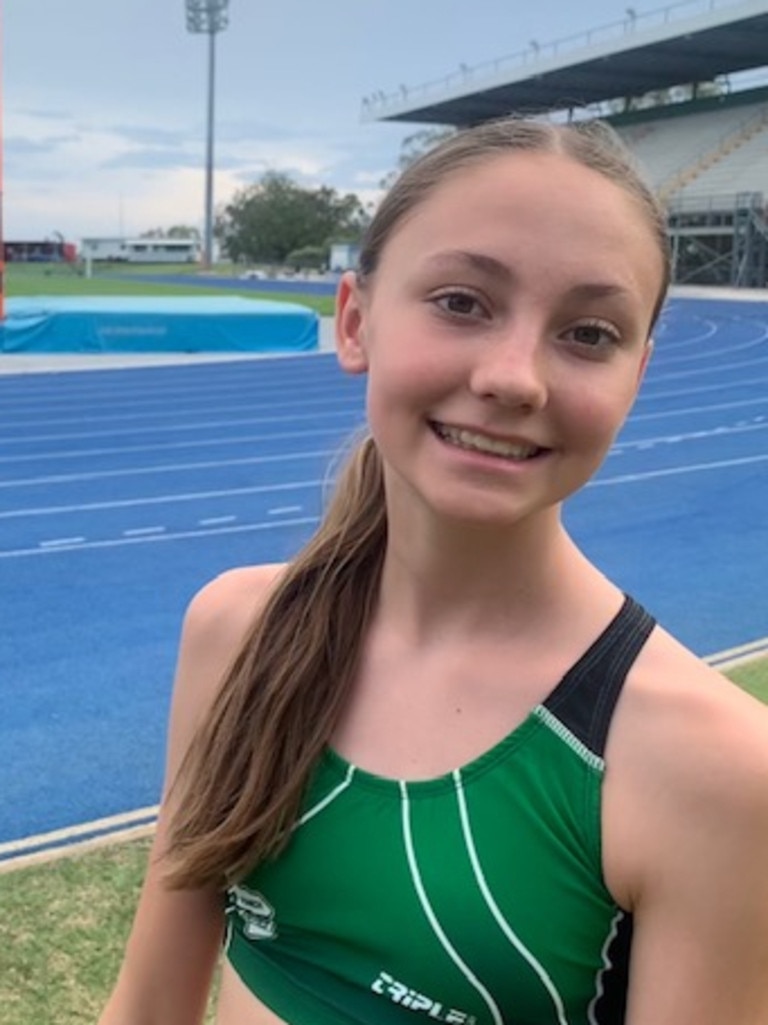 But as she looks to continue her promising athletic progress at the nationals next year, Toby is displaying some fine skills in other sports like basketball and indoor netball.

She has represented Brisbane Capitals and Met West in basketball at the state titles and plays with mum Marty in regular indoor netball competition at Darra.

Toby was also in the St Peters Lutheran Springfield netball team that contested the Vicki Wilson Cup in the September school holidays. While all that sport can present some time management issues, Toby said it was so far, so good juggling her multiple roles.

“We have made like a planner and planning out what I have and where I have it,” she said.

“So I know if there’s something more important then I should go to that.”

Marty was a national level heptathlete in the 1990s.

The Ipswich and District Athletic Club vice-president continues to do exceptional work as a coach, having also been chosen in an Australian over-30 honorary indoor netball team.

For Toby, that translates to a positive environment at training and deciding what she wants to pursue in the future.

“She’s good with all the events so that’s handy,” Toby said of having Marty as coach.

“I know she was pretty good.” Toby Stolberg, when she was 12, with mum Theresa at a Queensland Little Athletics State Championships.

Toby trains five-six days a week at UQ, QSAC and her school at Springfield.

She also still competes in the under-15 age group with Ipswich Little Athletics where she has steadily progressed in recent years.

As she moves into the higher ranks, Toby is comfortable pursing three sports, often at the same time.

“I’m just trying out at the moment but I’m mainly going to go to high jump,” she said.

That’s her favourite event, where she has a personal best of 1.66m.

Although she is overlooking the heptathlon nationals with her basketball commitments, she will focus on high jump at the next Australian championships. Like her mum, Toby is rising to every challenge and benefiting from her different disciplines.

“Basketball really helps with my running and fitness,” she said.

“Netball helps with my jumping.  It’s strength and fun.”

With more major competition looming in the new year, Toby is setting another round of athletic ambitions.

“I’m hoping for a couple of high jump goals at nationals,” she said.

“In basketball, I’m just hoping to do well at state titles again.”

Given her fantastic support network at club and at home, anything is possible for the promising regional prospect.