Regional athlete Jude Thomas has moved from setting records on the track to national standards in park running.

After Thomas broke another Australian record at the weekend, Reeves has little doubt the Ipswich and District Athletic Club and NANCI Running Crew competitor can represent his country in coming years.

“I’ve been around the sport for 50 years and I tried to look at it objectively . . . but he is the most talented runner I’ve ever seen in my life,” Reeves said.

An elite runner himself, Reeves said Thomas was a “realistic” chance of competing over 1500m at the next Commonwealth Games or the 2024 Olympics.

Jude’s latest national record was over 5km at the Kedron parkrun on Saturday morning.

Reeves said that was a significant achievement with 3000 registered runners and 30,000 park runners around Australia.

“The other thing is the parkrun is a world phenomena,” Reeves said.

“He (Thomas) is only 17 seconds outside the world parkrun record, which was set in England.” 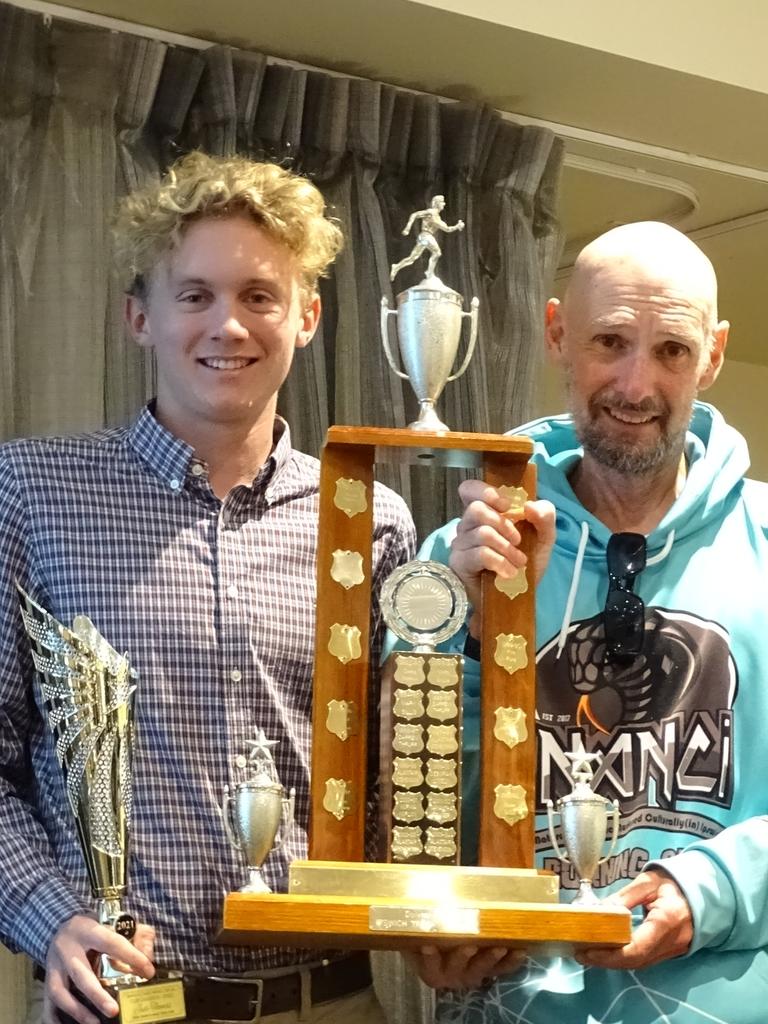 Jude Thomas and his coach Peter Reeves at the recent Ipswich club awards.

The former St Edmund’s College student is keen to contest the next World Cross Country championships in Bathurst, should a date be confirmed.

He missed out of being part of Australia’s World Junior team due to Covid cancellations.

Thomas is ranked number one in the world for his age over 3km.

Reeves has been coaching Thomas for a number of years.  However, the Karalee runner’s spate of recent state and Australian under-20 records have attracted widespread interest in his feats.

Thomas is being managed by the Melbourne Track Club and being monitored by national coach Nick Bideau.

However, Thomas is never far away from his beloved NANCI (Naturally Athletic Nurtured Culturally in Ipswich) running mates, who also shared in the latest Kedron parkrun.

Most satisfying for Reeves, apart from Jude’s record, was his NANCI crew beating the “BERT” (Brisbane Endurance Running Training) friendly rivals on their home course.

The highly successful running groups have been staging a fun challenges for a number of years.

Veteran runner Reeves competed on Saturday under a special age grading formula where he appreciated being paced by 10-year-old Conor Mathewson.

“He (Conor) gave up his own chance to run a good time to pace me to see if I could get an age grading . . . so it was very humbling,” Reeves said.

Another NANCI regular Dan Williams came third in his event, with multiple personal bests from the 30-strong Ipswich contingent.

The Ipswich coach said Thomas was planning to be a pace runner with other elite athletes over 10km during the Sunshine Coast half marathon in August.

He is also looking to set new standards, including Craig Hilliard’s state open 1500m record when the track season resumes later in the year.

Thomas was recently named the latest co-captain at the Ipswich District Athletics Club.

He is currently a Sport and Exercise Science student at the University of Southern Queensland Ipswich campus.