RAPIDLY improving Ipswich athlete Jude Thomas is favourite to take out the under-18 3000 metres at the Oceania Area Championships at Townsville from June 25-28.

He will also start a strong medal chance in the 1500 metre event.

The tenacious 17-year-old excelled at the recent Australian Athletics Championships in Sydney, bringing home gold in the 3000 metres and silver in the 1500 metres.

Thomas rounded the track faster than he ever had before on his way to a time of eight minutes and 34 seconds and the national title.

In the 1500 metres, he did not have it all his own way, finding himself boxed in and unable to attack the lead at will.

Despite the setback, he still managed to deliver a personal best time of three minutes and 54 seconds to claim runner up.

Elated with the results and the selection to his first Australian team, the emerging sensation is intent on staying grounded in the lead-up to the international competition that will showcase the best athletic talent the Pacific region has to offer.

“It feels pretty good,” Thomas said after finding out he would don green and gold.

“I need to stay focused on the future and not get overwhelmed, and keep training.”

While it was only his second time racing the 3000 metres at nationals, this star on the rise bettered his previous time by six seconds as he surged to victory.

The middle distance merchant has also shaved 12 seconds off his personal mark for the 1500 metres in just 12 months. 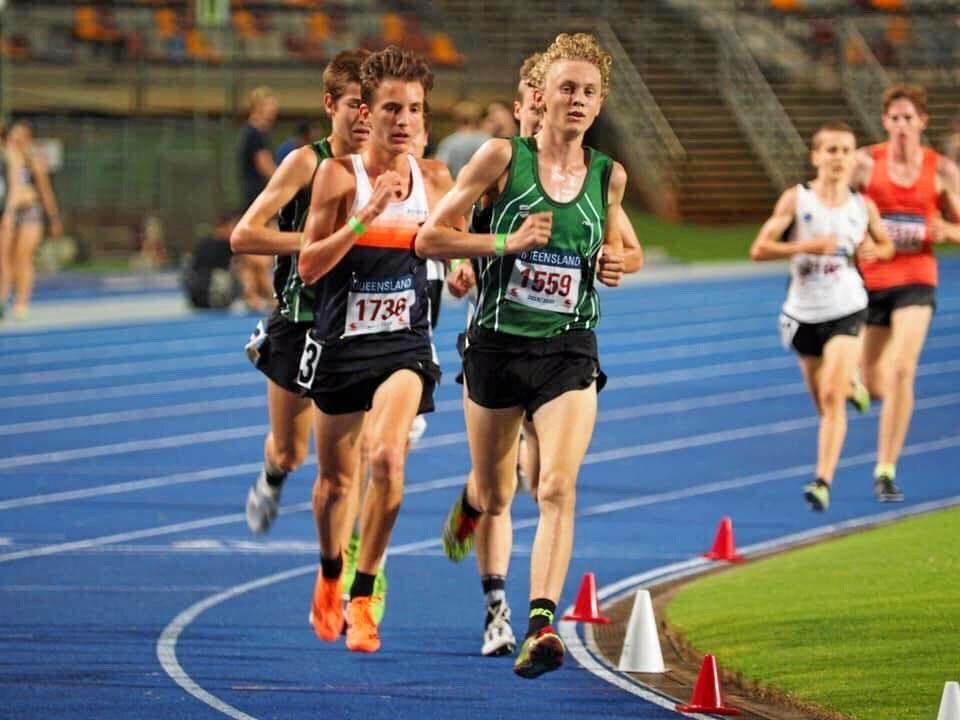 Ipswich athlete Jude Thomas leads the way during the Queensland under-18 3000m championships.

Thomas was by no means an overnight success.  The Karalee-based runner, who competed without fortune for years, said there was no secret to his recent development, which he attributed to sheer hard work and adhering to the revolutionary training techniques of influential kiwi coach, the late Arthur Lydiard.

Lydiard’s ground-breaking approach to preparing athletes for competition was based on periodisation and a strong aerobic base gained through running long distances at a slow pace.

Lauded as one of the greatest coaches of all-time, he presided over a golden era in New Zealand athletics during which he took Murray Halberg, Peter Snell and Barry Magee to the podium at the 1960 Rome Summer Olympics.

The master motivator passed away in 2004 but his methods are still leading athletes to remarkable feats.

Training at Limestone Park under Peter Reeves, Thomas has been putting in gruelling 140 kilometre weeks in search of an edge and he is reaping the rewards.

“But I’ve come through quite quickly through hours of training.

“The results come if you are willing to put in the long hours.”

Since linking with Reeves in January last year, Thomas has learned a great deal from his mentor as the pair formed a winning combination and he proved persistence really does pay.

“Peter has taught me a lot about training and running, and how to adapt to different distances and terrains.

“He knows everyone in the field’s ability and where they are at.  He knew I would win (nationals) in 8.34.”

Leading into the Oceania champs Thomas will increase his training workload even further and enter a number of cross country races throughout the south-east to sharpen his race skills.

“There is always room for improvement,” he said.

Determined not to be stuck at the back again, tactical awareness is one area where the driven young competitor and his coach have identified potential gains.

Rating the relationships and camaraderie fostered along the way his favourite aspects of the sport, he also desires to prove himself on the big stage.

“I love the big races, where there are a lot of people and the crowd is getting involved,” Thomas said.

Later this year, he hopes to dominate the Associated Independent Colleges’ competition and inspire his St Edmund’s College teammates to recapture the glory days.

“I’d like to go for some records and really leave a legacy,” he said.  “We (St Edmund’s) have quality in each discipline and a lot of potential.”

With absolute faith in his own ability and training regime, this confident young leader also aspires to obliterate the 1500 metre state record at the Queensland School Championships.

“I’m already beating it, I just need to run the time at the meet,” he said.

After graduating the strong-minded year 12 student is considering a career in sports science or teaching.

In the meantime, he’ll continue the juggling act of balancing his studies and demanding training schedule.

A long-term member of the Ipswich and District Athletic Club, Thomas echoed president Vic Pascoe’s calls for a tartan track to be constructed in the region.

“We deserve it,” he said.  “It would be a pretty big project but I’m optimistic.”

He said the Ipswich club punched well above its weight and had a tremendous atmosphere.  Thomas also praised the tireless contributions of Pascoe.